As bitcoin continues in an upward cycle, which has intensified in this year 2021, its position against gold as a store of value asset strengthens. The precious metal has fallen 14% since it reached its historical maximum of USD 2,071 an ounce, at the beginning of August 2020, as this Monday, February 22, it registered a price of USD 1,798 an ounce.

In the same period of six and a half months, since the historical high of gold on August 7, a fact reported by ForexDominion, the price of BTC has appreciated 360%, going from USD 11,564 to USD 53,429.

The following price chart shows the evolution of the price of gold and BTC since July 2020. 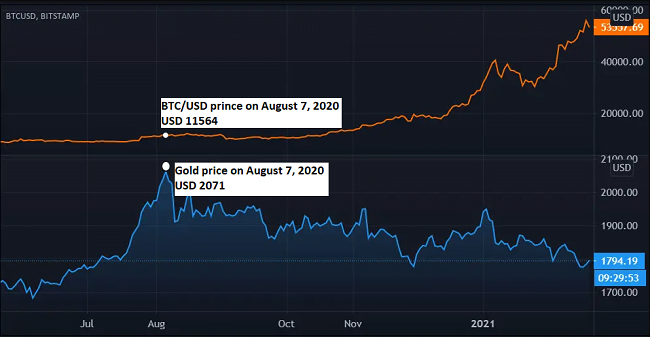 Specifically so far this year, the price of gold has fallen 13.5% from its initial value of USD 1,947. In the same period, the price of BTC has appreciated 81%, taking into account that on January 1, 2021 the price of BTC was 29,364, in figures from CoinMarketCap.

There is another metric to measure the positioning of BTC against gold, proposed by the BuyBitcoinWorldwide portal. It is about calculating the price of bitcoin in ounces of gold, taking into account the price of BTC and the ounce of gold in USD at a given time.

For example, this February 22, according to this portal, 28,728 ounces of gold are needed to buy 1 BTC, as shown in the following graph. 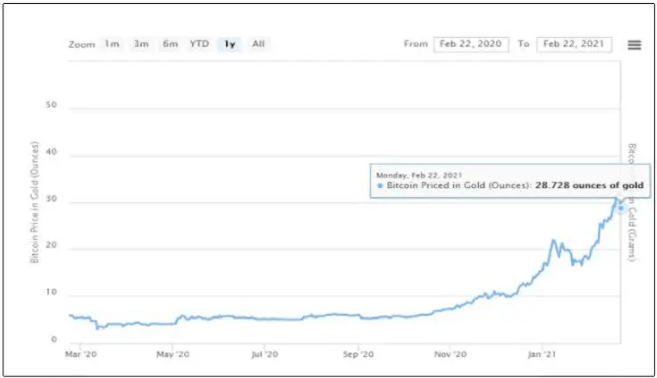 On January 1 of this year, 15,498 ounces of gold were required to acquire 1 BTC. This implies that BTC has appreciated 85% against gold so far this year. If this metric is used to know the appreciation of BTC against gold since last August 7, when the precious metal reached its historical maximum, the result is 402%. In both cases, this appreciation is greater than the return of BTC against the dollar (81% and 360%, respectively).

Investors prefer bitcoin as a store of value

This devaluation of gold against the pioneering cryptocurrency has affected its status as a safe haven asset against inflation. The growing adoption of Bitcoin by institutions and individuals is an endorsement for it as a producer of value, according to statements by the investment firm SkyBridge, reported by this medium. SkyBridge rates bitcoin as an emerging asset class, the risk of which has been declining in recent years.

It’s not just investors who are reconsidering the value of gold as a store of value. Also banks are starting to pay attention to the first cryptocurrency as an attractive asset for their customers. ForexDominion reviewed at the end of January the report of the chief economist of the Bank of Singapore, Mansoor Mohi-uddin, in which the specialist affirmed that gold could be replaced by bitcoin as a store of value.

On Friday, February 19, Jeffrey Gundlach, founder and CEO of DoubleLine Capital, an investment firm with more than USD 100 billion of assets under management who has supported gold as a safe haven asset, says that his position is “neutral” against the precious metal and bitcoin could be “the stimulus asset.”